In 1954, the message of Bahá’u’lláh was brought to The Gambia. Since then, the Bahá’í Faith has spread to 81 localities around the country. The Gambian Baha’i community currently holds regular devotional meetings, children’s classes, junior youth spiritual empowerment programs, and study circles in various localities across the country. 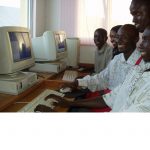 The Baha’i Computer Classes are an ongoing socioeconomic project that started in 1998. These free courses have taught computer literacy to thousands of Gambians of all ages and backgrounds. Students with little or no computer access or experience have been taught about computer hardware and software, and gained a practical knowledge of using computers, including in-depth knowledge of the Windows operating system and the advanced use of office suite programs such as Microsoft Word and Excel. Advanced classes have also been periodically offered, with courses in desktop publishing and video editing.

A Brief History of the Bahá’í Faith

The Bahá’í Faith began in 1844 in the city of Shiraz when a young Siyyid (descendant of the Prophet Muhammad) named Ali Muhammad declared that He was sent by God with a new Book and to prepare the world for the coming of “Him Whom God Shall Make Manifest”, Bahá’u’lláh.

Bahá’u’lláh suffered 40 years of imprisonment and exile from Iran to Akká in the Holy Land where He passed away in 1892. Interviewed by an Oxford Orientalist in 1890, He stated: “We desire but the good of the world and the happiness of the nations… These strifes and this bloodshed and discord must cease, and all men be as one kindred and one family.”

This is the essential teaching of the Baha’i Faith, that peace and unity in diversity will be established on our planet as humanity learns to abandon age old prejudices and to move forward in spiritual growth as well as scientific development. Bahá’u’lláh stated: “All men have been created to carry forward an ever-advancing civilization.” The fulfillment of this human potential rests upon unity. In past ages unity was achieved in the family, the tribe, the city, and the nation. It is toward the goal of world unity that humanity is now advancing.

The National Spiritual Assembly of the Bahá'ís of The Gambia
P.O. Box 2532
Serrekunda
The Gambia, West Africa

Or use this form: